Nate Dardar is a 6-foot-1-inch, 175lbs. quarterback from Pineville High School in Pineville, Louisiana. Nate is in the class of 2021, leading his team to their first two district wins in the past 50 years for the program. After missing all of his junior season due to two surgeries on his shoulder, Nate came back for his senior season solely focused on football and winning. He uses his tall-stature to deliver accurate throws on slants and quick runs to the flats. From extending plays to deep, precise throws on the run, Nate seems to not have missed a beat since his return to the gridiron.

At started playing around 4th grade. That gives me about 9 years of football, something like that. My dad got me into it, I watched a lot of football with him when I was little, I was a big baseball kid when I was little and started playing since I was 4 years old. I finally decided to play football in 4th grade, my mom was a little worried but my dad was all for it and was glad I could do that.

Being able to play on Friday nights after my shoulder injury. Being able to come out there with the guys who I’ve grown up with and play with them.

What happened with your shoulder?

I got injured my sophomore year playing baseball while pitching. I kept throwing without saying anything but I went and got an MRI in the spring which came back saying I had a slight rotator cuff tear. I went through therapy for a couple of months, got surgery on it in June of 2019. I missed all of my junior season for football and baseball after another surgery to remove some scar tissue. After that, I worked all spring and summer to get some arm strength back, more than I’ve ever done before.

Have you always played quarterback?

My first year I played quarterback, and I played a year up. I was always having to deal with a coach’s son being quarterback so I was moved to free safety. I was moved to wide receiver a little bit but then later on I was placed at quarterback for good. I like handling the ball a lot better than on defense but if I have to hit someone Ill go out there and hit someone. I never have a problem with that.

I’ve heard my coach describe me as a hard worker in the weight room and on the field. A great leader for the young guys and being a mentor for them on and off the field.

Where do you see yourself in four years?

Hopefully graduating college making a living and finding a job that I can make a good living for my family and myself. Finding a home to live in. I’ve looked at cyber-security as a study option.

Don’t take it for granted. It definitely flies by, it feels like just yesterday I was shaking my coach’s hand introducing myself to him and here I am today going into my last regular-season game. It flies by a lot faster than you think.

I like watching Drew Brees. In the college area, I would say, Bryce Young, I’ve watched him since high school and I’ve tried to mimic my form after him. I like watching Spencer Rattler, they’re both very good playmakers and they can make a play out of nothing. Brees has always been an inspiration for me for his efforts on and off the field. 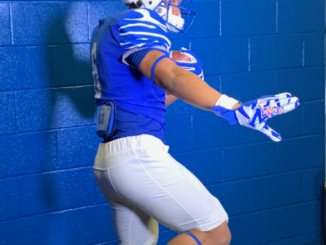 Diamond In The Rough: Donovan McCray

Diamond in the Rough: Jai Jones