The “Gridiron Gold” uniforms feature Old Gold jerseys reminiscent of the color the Tigers wore during the 1940s. The uniforms are also highlighted by white helmets with the players’ jersey numbers on either side of the headgear.

Other throwback elements include a vintage block “L” logo on right hip of the pants and the old school “Sailor Mike” logo on the collars of the jerseys.

“We’re very excited to wear the old LSU colors and honor the past with this new uniform,” said LSU All-America running back Leonard Fournette. “It’s a special moment for us to be able to wear it and represent Louisiana on the field. The uniform is a throwback; it’s a classy look.”

Following are descriptions of the elements that form the “Gridiron Gold” uniform:

Y.A. TITTLE ERA
The Gridiron Gold jersey design and numeral font are reminiscent of the style worn by Fighting Tigers during the college career of Y.A. Tittle, who played at LSU from 1944-47. In fact, the idea to create the throwback design was triggered by Tittle’s visit to the LSU campus just a few years ago. The Old Gold color of the throwback jersey mimics the color worn by Tittle and his teammates in the 1940s.

HELMET NUMBERS
The numbers are a tribute to LSU’s helmet design from 1957-71, when the players’ jersey numbers were also displayed on each side of the headgear. Coach Paul Dietzel introduced the helmet design in his second season at LSU in 1957, when the Tigers wore black, two-inch “NCAA style” numerals on the headgear. The size expanded to three inches in 1958, the season LSU captured its first national title.

LETTERMAN’S “L”
The block “L” on the right hip of the pants is the same style of letter that was worn by LSU athletics teams in the early-20th Century, including the 1908 football squad, which posted a perfect 10-0 mark. The block “L” is still used today as the official logo of the L Club, LSU’s organization for athletics letterwinners.

SAILOR MIKE
The “Sailor Mike” logo was extremely popular among LSU fans in the 1940s and ‘50s, especially when the Tigers won their first football national championship in 1958. The logo is featured on the collar of the throwback jersey, centered above the player’s jersey number. 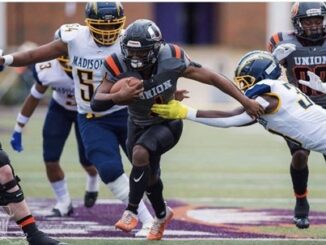 906 Comments on LSU TO WEAR ‘GRIDIRON GOLD’ UNIFORMS ON SATURDAY VS. MISSISSIPPI STATE