It did not take long for the biggest story of the day to develop as within seconds of entering the practice, I knew something was off, and that was the fact that only three LSU scholarship quarterbacks were practicing today. The one that was missing from practice happened to be the Tigers’ sixth year senior quarterback Myles Brennan. There was a lot of speculation on why Brennan happened to be missing from today’s practice. When the media left practice today, there were still a lot of questions.

At around noon today, everybody got an answer as LSU confirmed that Myles Brennan has stepped away from football and has decided to end his football career. It is a bitter ending for the St. Stanislaus High School record setting quarterback, who after six years with the Tigers, decided to call it quits. Brennan ends his LSU career with 1,712 yards and 13 touchdowns. LSU head coach Brian Kelly had this to say about Myles Brennan, who gave everything he had to the university.

“We are grateful to Myles for everything he has done for LSU Football. Myles is a great leader who has made a tremendous impact on this program, and he has earned the respect of everyone here through his commitment and love for LSU.”

Now, the LSU quarterback race is down to two with Jayden Daniels and Garrett Nussmeier battling to be the starting quarterback. After being limited in Thursday’s practice, Nussmeier returned to practice fully healthy and shared first team reps with Daniels today.

The Tigers’ four running backs Noah Cain, John Emery Jr., Armoni Goodwin, and Josh Williams all rotated with each quarterback continuing to show the Tigers’ stance on being a running back by committee.

Once again, the starting offensive line rotation was consistent with Garrett Dellinger continuing to get first team reps at center. The combination was the same with Anthony Bradford at right tackle, Miles Frazier at right guard, Tre’Mond Shorts at left guard, and Will Campbell at left tackle.

Good news for the wide receivers is that Chris Hilton Jr. has returned to practice and has been running routes with the wide receivers. Jack Bech is still working off to the side as he continues to make his way back practicing with the receivers. Kayshon Boutte, Malik Nabers, Jaray Jenkins, and Brian Thomas Jr. continue to show why they are the leaders of the group.

At linebacker, that has also been a position group that has shown a lot of consistency with Greg Penn and Mike Jones Jr. getting the first team reps. Virginia transfer West Weeks and freshman Harold Perkins got reps with the twos.

On the defensive line, the starting front has consistently been the same. What is interesting to see is who emerges in the two deep behind the likes of Ali Gaye, Jaquelin Roy, and Maason Smith. Saivion Jones, Jacobian Guillory, and Bryce Langston were getting reps with the twos today. Those three players have stepped up as the coaching staff likes what they have seen from those players so far. Princeton Malbrue also got some second team looks today as Desmond Little was seen riding the training bike today.

The next practice report will be on Wednesday as for the second time, the whole practice will be available to the media.

Click the link below to watch today’s practice! If you haven’t done so already, please subscribe to our YouTube channel and hit the bell to get notified on when we post all of our videos! 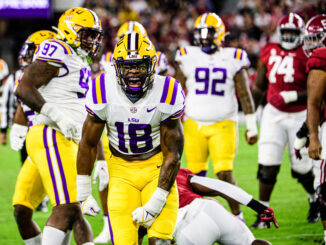 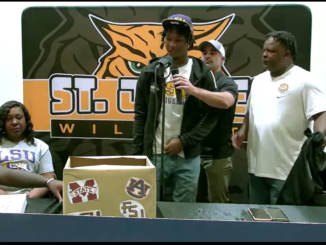