Thursday, August 4th marked the first day of fall practice for the 2022 LSU Tigers. It is the first time that all the coaches and players are together working on one goal, which is to get ready for its big Labor Day weekend matchup against Florida State. For the next four weeks, players are competing with one another for starting spots and storylines will begin to take shape for the 2022 season.

The first fall practice was held in the Tigers’ indoor facility as the 110 players practiced in their shorts and helmets. For Coach Kelly, his main objective for his players the first practice was to make sure that everybody was getting back to the structure of practice and setting the expectations the coaches have for them over these practices.

“I was really proud of the way they were focused on what we asked them to do. It’s understanding the technical and tactical aspects of practice. That’s what we are trying to do. We are trying to lay down the programming so when we get to Florida State, just press play and go play fast. They did a nice job today. The tenets of what we want in practice – running out and doing it the right way, not having guys on the ground, not being sloppy – was really good for me. We’ve come a long way since the spring so it’s good to see that retention and feeling good about how to practice the right way.”

Considering it is the first day of fall practice, everybody was pretty healthy for the most part. Star wide receiver Kayshon Boutte was back practicing with the team in his new number seven jersey after suffering an ankle injury last fall. Having Boutte back was definitely a sight for sore eyes, and it also was Coach Kelly’s first good look at the preseason All-American candidate.

“This was my first glimpse at him and he’s an explosive player. He’s learning how to practice. Today he was a guy that I had to remind a little about how to practice the right way. He’s so committed, he’s worked so hard. I’m excited for him. I just like the fact that he’s totally committed to what we are doing and how we are doing it.”

The only two injuries to note was Jack Beck is recovering from shin splints while Demario Tolan is coming back from a discectomy. Both injuries are not serious and they are exactly where the school wants them to be.

The biggest news to come out of the school today is that running back Tre Bradford is no longer on the roster. Coach Kelly announced that he is “separated” from the school and could not comment any further. Despite the loss of Bradford, there are still a lot of mouths to feed in a loaded backfield.

““They’re all gonna have a great chance to contribute. I really like the depth of the group, you add [Noah] Cain to that mix as well and I think all of them have a chance to contribute much like we saw in the spring game. I think that’s going to be what happens this year and I’m ok with that, I think that’s great. All of them are very competitive and bring something different to the table. But all will contribute in some fashion.”

The same can be said for the wide receiving core as there is a lot of talent, but Coach Kelly wants to see what young players emerge in a deep group.

“Thomas, Nabers, Hilton, I’d like to see them all continue to develop because they are young receivers. Those would be the guys in particular. Jenkins has shown some things in spring that shows us he’s progressing. All of those guys are talented, but more than anything else it’s the consistency we want to see from those guys – that they do it play in and play out. Consistency and performance is really what we’re looking for from that group and if we get that, it will be a dynamic group.”

The quarterback position is what everybody is keeping their closest eye on for obvious reasons. There are still a lot of mysteries around the quarterback competition as all four scholarship quarterbacks got equal reps in the first day of practice working on footwork drills and also working with the running backs in mesh-points and throwing to running backs. The questions surrounding the starting quarterback will continue to linger for these next couple of weeks.

“They’re all anxious to show what they can do. They want that opportunity, so they’ve all prepared really hard. They’re all in great shape. Their mental preparation is so much further a long now that they know the playbook. They’re all anxious to get out there and showcase what they can do. Today was much more of the basic tenants of footwork, across the field progressions, those kind of things and you can see they’re past that and ready to move to the next level.”

There was a lot of mixing and matching along the offensive line so finding the best starting five will be a long process as well.

““Brad and I were having a conversation about it even during practice because there’s a lot of moving parts. Dellinger’s at guard, we wanna see him at center a little bit. You saw Frazier at guard with Bradford but Frazier could play tackle as well. We’ve paired them on the right side because we think they’re interchangeable. We like the fact Bradford has really good feet but Frazier’s got some length. Those guys are going to be center/guard combinations right now but I think it’s important there’s some flexibility here for the first two, two and a half weeks and we’ll build the starting five. Finding the rotation where your tackle is solidified, the center position and then we’ve got some good depth building but I think it’s gonna take a little while for it to pan out.”

Mike Jones Jr., Greg Penn, West Weeks, and freshman Harold Perkins were working the inside linebacker drills while Micah Baskerville and Jared Small were working drills with another group.

The secondary is filled with new faces including Jarrick Bernard Converse, who had a great first fall practice, Sevyn Banks, who was working with trainers, Mekhi Garner, Greg Brooks, and others getting reps in.

With the coaching staff’s plan to ease the team through practice the first couple of days, there will not be a lot of separation in the depth chart, but Coach Kelly knows that the veterans and the newcomers are now acclimated to each other and are now playing together as one unit.

“We kind of went through that in the spring because most of those guys were here. They assimilated very well and they got a lot of work in the spring and had a really good summer. I would say that’s already played itself out and they’ve immersed themselves into the program and are seen as one. Cain is new to the program but other than that, everybody has assimilated quite well.”

The Tigers will next have a workout on Friday at 4:00 P.M. at the Charles McClendon Indoor Practice Facility.

Here are some video highlights of the Tiger’s first day in fall practice. 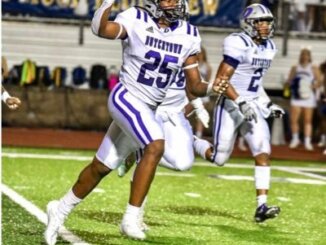