The Riverside Academy Rebels improve to 3-0 against now 0-3 Sophie B. Wright after holding off a late surge of momentum from the Warriors in their home-opener. Riverside 48, Wright 40.

The game began with an eruption of cheers as the Rebels took to the cold gridiron in Reserve, LA. Riverside was coming off of an offensive-minded game against Catholic Point-Coupe, now seeking to extend their record to a dominant 3-0. To achieve that, they would have to go through Sophie B. Wright, still searching for their first win of the season.

The Warriors would start the game off with great field position near the middle of the field, but would shortly be taken away by the star of the night, senior athlete Gage Larvadain.

The same energy would follow into the second quarter as Gage scores his fourth touchdown, this one his first passing. The running game would slowly open up as the Rebels continue to put pressure on the Warriors defensive line, sophomore running back Elijah Davis scoring as a result.

On the other side of the ball, the Warriors struggled to keep up with the scoring clinic of the Rebels. Junior quarterback, Trevontay Alford threw for one touchdown in the first quarter but was steadily chased by sophomore edge-rusher Hunter Champagne of the Rebels. The trend repeated in the second quarter as the Rebels edge rush prevented any comfortability for Trevontay. The Warriors would secure another score before half off of an interception in the red zone.

At halftime, Riverside led 34 to Wright’s 12, the Warriors not converting either of their two-point conversion attempts. Coming out of the half, the story would be flipped.

Signs of the Rebels’ weakness at open-field tackling were slowly taking form before the half, but throughout the third quarter were very evident. From miscues to busted coverages, the defense for Riverside allowed Wright to gain ground for a possible final push in the fourth quarter. Out of all the madness occurring Gage managed to get his fifth touchdown of the night after a 75-yard run downfield.

The Warriors were gaining momentum quickly out of halftime, keeping the Rebels’ offense off of the field for long periods of time. Trevontay would throw a pair of passing touchdowns to senior receivers Jon McCall and Tyquan Alford to bridge the gap between the two teams for a late fourth-quarter push.

After a rushing touchdown by the Warriors and Trevontay’s third passing touchdown of the evening, Wright was in a position to take over the game with nearly eight minutes left, despite failing another two-point conversion attempt. Emotions were brewing and tensions rose as Riverside couldn’t get it going like before halftime. However, after two missed opportunities on fourth down, Gage returned to lead the way to victory.

“Gage is special, we all know he’s a playmaker its just a matter of making sure he’s focused enough to understand what we had to do on those last crucial drives,” said Head Coach Kevin Dizer after the game. “When you have a guy like that you put the ball in his hands and trust him to get it done.”

Assisted by sophomore quarterback Luke Hymel, who had two passing touchdowns and an interception, yet didn’t see much time in the third or fourth quarter, the offense finally clicked and pushed downfield into the red zone. Gage, now in the leading wide receiver caught two third-down passes to set up a run by Elijah, leading against the Warriors by eight.

“Those guys are gonna be special,” said Dizer, speaking about the sophomore talent he has on his team in Luke and Elijah.

However, with a little over two minutes left in the game, Wright was looking to have a chance again to take the lead and the game. The chance would be taken by senior defensive back Tairyn Lockhart, who made an acrobatic interception to ice the game and secure a win for the Riverside Academy Rebels.

“It’s wonderful, all praise to God and my teammates,” said Gage after the game. “They put in a lot of work…so many great things are happening because of that.”

Following the end of the game, Dizer was visibly disappointed in his team for not finishing the game sooner than expected.

“We just got to get better,” said Dizer. “We had an opportunity to put that team completely away…we were immature, we were selfish and we let them back in the game.” 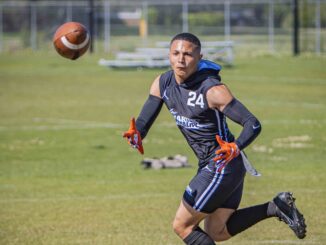 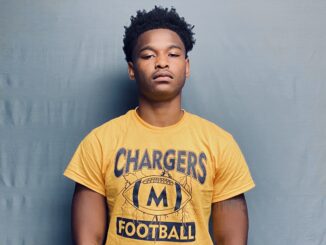 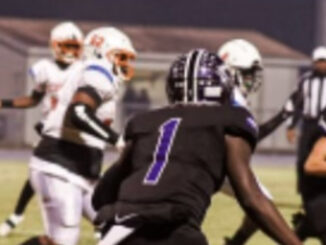