Going into only five seasons with the first being a junior varsity season, the Kenner Discovery Swamp Owls have certainly spread their wings as one of the best football programs on the rise in South Louisiana. Located in Metairie, Louisiana, Kenner Discovery has been one of the most impressive new football teams to come through the state. As I mentioned in just a few short years, head coach PJ Sprunk has guided the program to a 16-11 overall record including the last two seasons being playoff seasons. After a 5-2 season with a first round playoff loss to Jena for the second year in a row, Coach Sprunk has this team going in the right direction. I got the chance to visit the Swamp Owls as they were on their final day of a team retreat down at Camp Living Waters in Loranger, Louisiana.

“Every year, we do a fall camp retreat and try to get our kids away from campus for a few days. This year, we chose Camp Living Waters. They have been extremely accommodating. We take our kids away from their environment. When they get on the bus to check in, we check their cellphones and we have them over the course of three days, basically having two practices per day with workouts in between along with some team bonding. We are here to get an jump on our padded practices here. The biggest thing is that we have 75 kids every year consistently, which is great to have, but sometimes, we have new kids coming in and new guys coming out so we want to spend a couple of days together where all they have to do is talk, bond, and work together. We came here as a team and leave here as a family.”

Not only the wins have been impressive for this program, but the team has already sent several players to play at the college level including Zander Milton to Alabama State and Chad Woodson to Louisiana Christian. Gridiron Football CEO Andy Bryson was also there to present offensive linemen Deshawn and Dashawn Clark with invitations to play in this year’s Gridiron Football All-Star Bowl Game. Coach can’t say more about what the two senior Clark twins mean to the program.

“Deshawn and Dashawn Clark are two kids that embody what we do at Kenner Discovery. When they stepped on campus four years ago, they were special. Honestly, if they were 6’0 or 6’1, you would know a lot more about them. They play at a high level. I’ve said this to everybody and I will put them against anybody in the state right now. They are that good. They are just undersized and that’s okay. They use their strength, speed, and agility to their advantage. These two kids are integral parts of our program. They’ve been captains for three years running and they set the example in everything that we do. The kids look up to them. They’ve been the voices of our program since that time, which is huge when you are starting a new program. They helped build this thing from the ground up.”

Just like the players, who have been here since the beginning, the coaches have seen the development of this program from year one all the way until now.

“When we first started here, we literally had no footballs. We had four cones and on the first day of practice, we had 11 kids show up. It took a lot of prayer and a lot of faith, but I knew that we had something special. Our kids are tough, hard nosed, and they worked. Then, everyday, more and more kids have shown up. Before you know it, we had 35 kids. That first JV season was tough. We had a lot of kids that didn’t play games a lot. We hired a staff here with Coach Shannon Craig and Coach Kenny Greene first coming on board. They are still here with us today and we added some great coaches with Dan Erwin coming over from Hahnville and Nick Fortuna, who is a great defensive backs coach for us. We got guys on the staff now that can grow our kids and that is important. Stability is huge. Our kids still don’t have a locker room. Our weight room is a converted classroom, but we make it work. They are hard working blue collar kids. We are tough on them, but I can’t say enough about how much they work and their attitude.”

That attitude and drive to be a part of something special has risen this team to plenty of new heights as the Swamp Owls are even ahead of some more established teams in terms of goals and now even moving up to Class 4A.

“Our slogan this year is simple. {It is time}. The last two years, we were in the playoffs. We were 5-3 two years and 5-2 last year. Our first year, we went 6-4, and got snubbed out of a playoff spot, but we just didn’t do enough to take care of that year. This year, we feel that we have the talent, the depth, the speed, and the size to really make a deep run in the playoffs.”

Just like the program, there are a lot of players that are on the rise as well and have a chance to make a lot of noise for the 2022 season.

Marcus Clark is a do it all Class of 2023 prospect for the Swamp Owls. Marcus may only be 5’8, 145 pounds, but he plays even bigger than that on the field. For the team, Marcus has shown his versatility by playing running back, outside linebacker, safety, and cornerback. For him, it doesn’t matter what position he plays because he enjoys playing them all. Marcus says that the biggest strengths tho his game are his physicality and his speed. His favorite part about football is that he just loves being a part of a program. His goal for the season is to win state and for all the college coaches out there, his message to them is that he is ready to work.

Emanni Chapman is a Class of 2023 left guard for the Swamp Owls. At 6-2, 285 pounds, Emanni has the size and has moved around the offensive line to play at different spots for the team. Emanni says that his biggest strength to his game is using his quick hands for punching in pass protection or in the run game. He also likes his footwork as an offensive lineman. For the upcoming season, he wants to continue to improve on his football IQ as well as getting faster and stronger. At the end of the season, all he wants is a full ride scholarship to play at the next level. His message to the college coaches is that he works hard everyday and that he will be the first person at the facilities every day.

Spencer Newton is a Class of 2024 linebacker for the Swamp Owls. At 6’0, 190 pounds, Spencer has made the transition from tight end to linebacker and has now settled into his new role after having three sacks last season. The biggest attribute that Spencer wants to improve on the most is his communication skills knowing that the middle linebacker is the one player that sets the tone for the rest of the defense. He also says that the biggest strength to his game is how he attacks and runs to the football. In the classroom, Spencer has a 3.75 GPA and also plays soccer for the school as well.

Cameron Gardner is already drawing a lot of attention as a Class of 2024 free safety prospect for the Swamp Owls. At 6’1, 190 pounds with ball hawking instincts, Cameron had a breakout sophomore season with seven interceptions. Nicknamed “The Quiet Assassin”, Cameron lets his play speak for itself. So far, LSU, Mississippi State, and Tulane have already shown a lot of interest. Besides the schools showing him interest, Cameron hopes that the UL Ragin’ Cajuns, the Auburn Tigers, and the Texas A&M Aggies can start showing interest in him too. Cameron says that his biggest strengths are pursuing to the football and he wants to work on being more outspoken and communicating better to his teammates. Growing up, Cameron grew up admiring Tyrann Mathieu and what he has done over his incredible career as a safety.

Make sure to check back with us as I will post the complete interview with Kenner Discover head coach PJ Sprunk soon! 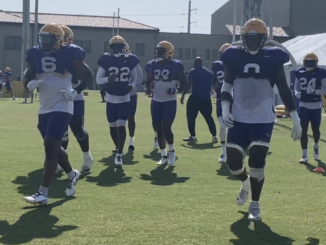 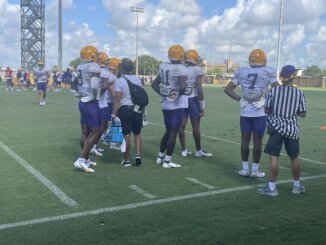 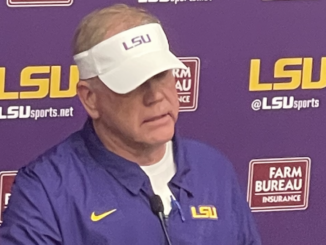 LSU Begins Fall Practice In Year One Under Brian Kelly