The Louisiana College football fall camp continued on Monday with the team’s first practice in full pads.  On Tuesday they team will have its first “2-a-day” practices with a morning session at 8:30 am and an afternoon session beginning at 3:00 pm.

With only a handful of days until the season begins on September 3rd in Pineville with the Wildcats taking on Division III power Huntingdon, ranked #24 in the 2016 preseason poll (d3football.com), the coaching staff is pleased with the progress the team has made through the first few days of camp.

Head Coach Dennis Dunn said, “Our 1’s are very sharp on both sides of the ball.  Defensively we’ve come up with several big stops in the red zone during the two-minute drill, so that’s a very good sign. The defense has made key stops in key situations. So everything that we want to see at this point in camp, we are seeing.”

New offensive coordinator Ben McLaughlin, who returns the Wildcat program after breaking multiple school passing records as a player, echoed Dunn’s assessment of the progress being made by the team.

McLaughlin said, “We’re coming along pretty well, we’re trying to really let the 1’s and 2’s get out there and get some reps but at the same time get some freshman in while they’re learning the offense.  The 1’s are really coming along; we’re meshing well. We’ve got a lot of guys returning so we’ve got a lot of experience, and so far so good, the main goal right now is to stay healthy and make sure everybody is good for week one.”

After a lackluster performance by the defensive unit last year that finished last in the ASC in total defense, allowing over 5,000 yards on the year, coordinator Justin Charles is getting back to basics for this camp.

Charles said, “There’s a lot of competition this year so we’re harping a lot on technique, guys are really focusing on execution of the play and not looking forward to the next play or what happened on the last play.  We’re very pleased with the first five days of camp, there are a couple guys that are standing out, that have experience, and we’re looking for a little more depth in certain position, but we have a lot of new faces in the depth spots and old faces in the good spots.  I’m very pleased with the guys’ responses to the coaching with Coach Maddox and Coach Janzen; we have a good mix of styles between us.”

The team will continue its fall camp schedule through the end of the weekend, before beginning classes on Monday August 22. Wednesday’s single practice will begin at 3:10 pm at Wildcat Field before another “2-a-day” on Thursday.  All practices are open to fans to attend.

Season tickets are still available for purchase for the six Louisiana College home football games this season.  Tickets are sold in pairs of two, which also include a parking pass, for $150.  To order your seats for the 2016 season call Brad Welborn at 318-487-7987. 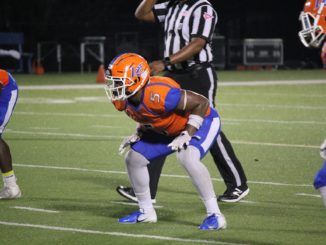