Brody Glenn is a class of 2022 wide receiver for Bishop Luers High School in Fort Wayne, Indiana. Glenn stands in at 6’1 and 175 lbs., this build allows him to be very versatile and excel in every aspect at receiver. While watching his film it is evident that no defenders are able to keep up with him, which makes sense since he ran a 4.57 40-yard dash. His speed isn’t the only thing DBs fear from Glenn, his route running often ends with defenders on the ground or 10 yards behind him. If all of this wasn’t enough to convince you that he is elite, his stats this season might do it as he racked up 1265 yards and 16 touchdowns! As Brody Glenn enters his senior season, we are excited to see him prove himself and maybe even end his high school journey with a ring.

When did you start playing football and why? Started playing around 7, my dad wanted me to play and watching NFL pushed me and helped me fall in love with the game.

Favorite moment of your career so far? Sectional Championship, it was a sort of revenge game from last year, I had a good game with 4 touchdowns and a good team win.

What current or past player do you think you play like the most? Courtland Sutton and Justin Jefferson because I have good speed and great route running.

Do you play any sports outside of football, and what do you think you adds to your game? Basketball, it helped me with my footwork and agility, helped me be shifty and helped be competitive.

Do you have any pregame rituals? Before games after school, I go home, and I watch an episode of sponge bob, I also put some oil, that my grandmother gave me, on my hands and knees.

Do you have a quote or anything that pushes you daily? “I hated every minute of training, but I said: Don’t quit. Suffer now and live the rest of your life as a champion.” – Muhammed Ali.

What do you think a college would get out of you as a player? I try to outwork everyone, and I love the game, I would never give up on it. I’m also a team player and will do anything to win.

What motivates you to get up and train every day? To get to the next level and play D1 football, also the state loss hurt, and I want to get back up there, also I want to play good for my grandma.

What do you think makes you a good teammate? I won’t let my teammates slack off; I’m trying to make everyone better.

Who has pushed you most in your football journey? My dad, he always watched me play and helped show me different receivers to watch.

What do you think sets you apart from other athletes? I don’t live like most high schoolers would, I never party and I have a small group of friends.

What do you think the best part of your game is? Route running, my separation skills are super good.

Do you prefer to be pressed by the DB or not? Doesn’t really matter, but I like when they press so I can make a release and get open, I like to be physical at the line.

Inside or outside routes? All depends on the defense, but I like running out routes, I also running posts.

Favorite catching drill? I like working with tennis balls, I work with two and throw them against a wall, work on hand eye coordination.

What is the best catch you have made in game? One was a toe tap for a touchdown off a post corner, another one was the semi state game, it was a post, I jumped up, the DB cut my legs out and I still came down with the ball.

What are you thinking pre snap? I’m looking at his shading, whether its inside or outside, and which release I should use after the snap.

Favorite part of playing receiver? I like making big plays, catching the ball, it makes the game a lot more fun than handing the ball off.

Diamond in the Rough – Koby Linares 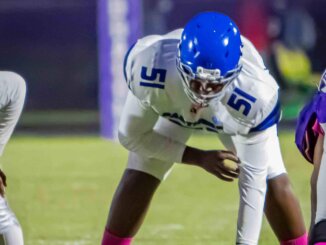 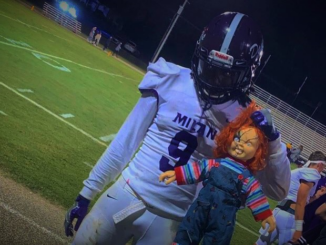