Qamar Grant is a class of 2023 quarterback for Pebblebrook High School in Mableton, Georgia. Grant is 6’4” and 240 lbs. Qamar is a pocket passing quarterback who has the kind of accuracy and size that translates to the next level. Grant spends his offseason with the Cam Newton 7 on 7 team constantly working to perfect his craft. Grant is also a leader in the classroom holding a 3.3 GPA.

I have been playing football for as long as I can remember. I think I started when I was around 4. My mom and dad were the first people who influenced me to start playing. My dad played in middle school and a little in high school but he was really big on basketball. So from that I have always gotten the coach point of view from him in focusing on bettering myself through drills and whatnot.

I run track and wrestle. I don’t love those sports as much as football but I think playing those sports has helped translate certain skills toward my play in football. Wrestling has helped me move my body around and be more comfortable with shifting my weight. For instance I have noticed that it has made the movement of flipping my hips to be able to get out of the pocket more consistent. Track has mostly helped me with my explosion and training my body to run the correct way.

If I am not working with my actual trainer, I am working with the Cam Newton 7 on 7 team that I am a part of. Besides traveling to different places with them, I have been working on my conditioning to get my stamina up. Also I wanted to make it a point of emphasis to get the ball out quickly so that I won’t be gun shy. Working on that a lot this off-season has helped make me a more confident and decisive quarterback.

Did you have any goals for this season?

Our goal was to win regions, but we fell short against McEachern. What I want the most is to be able to push my players to be better not only as football players but as people. Being the best version of yourself is something that will help you in every aspect of life and I take pride in pushing them to strive for more out of themselves.

What kind of quarter back would you describe yourself as? Are you more of a pocket passer or dual threat?

I would say that I am more of a pocket passer, but if I need I can scramble to get the extra yardage. I’m always willing to extend the play or drop my shoulder and get the first. I’m telling you now I’m going to get that dual threat tag. I can promise you that.

What is your favorite part about playing quarterback?

I like the love/hate aspect of playing quarterback. People will always over analyze the quarterback position. Everyone wants to say like he can’t do this he can’t do that, but the joke is on them because I love proving people wrong. I want people to doubt me so that I can show them that I can do it. I remember even when I was young people would always say that I can’t be a quarterback because I’m too big, but it just tastes so much sweeter when you’re proving people wrong. Other than that, the thing I love about being at quarterback is doing everything with my teammates. They have trust in me and I have trust in them so when we are doing everything together as a team it’s the best feeling in the world.

Probably as a person who is very direct. I’m the kind of person who gets to the point and I tend to have an attitude when it is game time. However, it is just because I am so committed to winning. I’m always gritty in the game, but when it comes to the sideline and off the field, I think they would describe me as goofy and someone who likes to play around.

I feel like it my strong suit would have to be my ability to get the ball to a good spot for my receiver down the field. Our team relies on more quick screens and vertical balls, so I have become accustomed to trusting my deep ball more and because of that I have seen the growth in my game.

I would say my speed for sure. I have gotten faster since I transferred and started working on it more. But this game is becoming more and more speed driven, so I want to be in a place where I can increase my speed to be able compete at the next level.

Do you have any role models who have inspired you?

My dad has inspired me a lot. When I was growing up we weren’t super close but now through football we have formed a closer relationship. We started having a lot of conversations about football and how to push through to get better. He had it rough when he was growing up, but he never gave up, he never gave in, he was always trying to get to the next level and help his family. I realized that we didn’t have that many differences, and now that is what I’m trying to do for my family.

Before every snap I try to identify the coverage. But I’m not only looking at the coverage I’m also looking at the matchups. I know if we got Dwight Phillips out there on the outside, and there is a cornerback pressed up with the defense in cover one, I am going to be able to take advantage of that matchup every day. Just the same as if the outside linebackers are in inside leverage, I have Brian Powers in the backfield who can take advantage of that. So just being able to see the coverage and see the matchups before every play gives me an advantage and helps me envision how each play will turn out.

That I’m going to work to get better no matter what. If God forbid, I somehow hurt my throwing shoulder, I am going to find a way to make my wrist strong enough to be better than the player I am right now. I will never give up this game.

I think that the biggest adversity that I had to overcome was in our matchup against Newnan. It was a tough game for us. We came out sluggish, we kept putting the defense on the field with dropped passes and miscommunications leading to turnovers. But we were able to get a chance with the ball with 30 seconds left, Coach turned to me and asked me what I was thinking and I told him we need to get the ball in the hands of Dwight Powers. We ran a running back screen, and he was fighting down the sideline and was able to move the ball up 20 yards. Our kicker came in and hit the field goal and we walked away with the win. That game just showed that we can push through a bad performance and still get the win because no matter what at the end of the year, our record is only as good as our wins and losses.

Why do you play football?

I made a promise with my uncle who died a couple years back. I told him that I wouldn’t crash out, that I would do the thing that I love for him. I want to provide for my family, I want my tight core family to be better, and I want no bills for my mom.

Of course, there are so many things that you learn in football that translate to life. It’s always about the little small details, things like running through the line, finishing every rep with your best foot forward, handling the small things before you handle the big things.

Yes, it has taught me that you can’t do everything by yourself. You are going to need help no matter what and you cannot be afraid to ask for it. Football has shown me but you can be successful if you’ve got good guys on your side that want what you want and will fight for you, and I am lucky to have that support system. 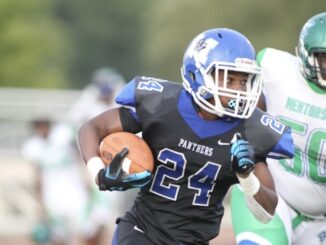