Max Reese is a wide receiver in the class of 2022 for Fenwick high school in Oak Park, Illinois. Reese stands in at 6’3” and 200 lbs., this build makes him an absolute threat for any offense. Reese uses his size and makes impossible catches over anyone who tries to defend against him. His size makes the perfect complement to his amazing skills and speed; this is displayed in film as he torches defenses downfield. Running a 4.5 second 40 yard dash, it seems as though no defender stands a chance guarding him man to man. His hard work and success carry into his schoolwork as he is currently posting a 3.3 GPA. With the nearly endless potential, Max Reese should definitely be a player to lookout for next season.

When did you start playing football and what got you into it? Started playing in 2nd grade in Dallas with flag football, I just enjoyed playing with my friends. Then I moved to Chicago and noticed I was better than most kids. I stopped playing for a while and then one of the coaches got me back into it my sophomore year and I have fallen in love with the game.

Favorite moment of your career so far? My favorite moment was our Nazareth game, the bus ride there was awesome, and the game was great as well.

What current or past player do you think you play like the most? DK Metcalf and AJ brown.

Do you play any sports outside of football, and what do you think you adds to your game? Basketball, it really helped with my conditioning, my jumping ability, and also my competitive edge.

Do you have any pregame rituals? One thing I always do before anything is pray for safety during my practice or game and I always eat pasta.

Going into your Junior season, what are you looking forward to? I’m excited to show people the work I have put it since last year, I’m understand the game now, my footwork is better, I’m faster and just an overall better player since then.

Do you have a quote or anything that pushes you daily? “A man is not who he says he is, he is who he hides,” and “why would you want to average, you’re the best of the worst and the worst of the best.”

What do you think a college would get out of you as a player? They will get a diamond in the rough, I’m very underrated, I have the mindset that if I’m competing against another person for a spot I am never going to lose and I’m not settling for anything.

Who has pushed you most in your football journey? Coach Gene Nudo got me back into football, also my dad pushes me to be the best player that I can be, and I appreciate him for that.

What do you think sets you apart from other athletes? The way I view the game as a whole.

What do you think the best part of your game is? My physical ability and my hands, I never drop passes. I’m also not afraid to be hit, I embrace contact.

Would you consider yourself a possession, speed, or route running specialist? A physical receiver with a lot of speed.

Do you prefer to be pressed by the DB or not? I like both, but if they press then I’m going to outmuscle you, and if you play off then you give me the inside and an easy catch.

Favorite skill move in open field? I like all of them, but my favorite is stiff arms.

Inside or outside routes? Insides, I feel like most people don’t like the inside routes and I want to stand out to people, so I have adapted and worked to love those inside routes.

Favorite catching drill? I like going on the jugs machine, I also like laying on my back and catching from every angle.

Best catch you have made in game? I had a one hand catch on the sideline.

What are you thinking pre snap? First thing I look at is my route depth, then I look at the defensive coverage, and finally I look at my matchup to see which move I should do.

Favorite part of playing receiver? Going out there on the field and being an athlete and playmaker. 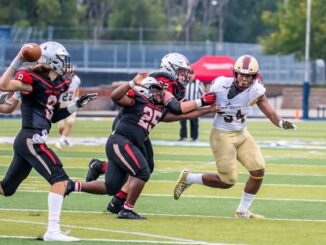 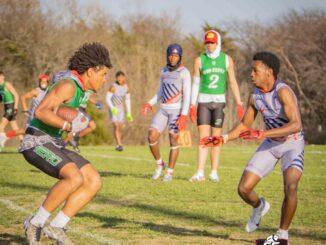 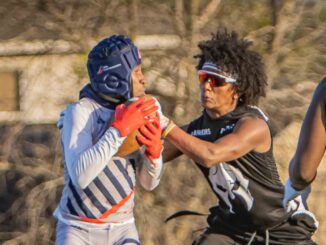