Harold Lawson is a 2023 recruit from Catholic High School in Baton Rouge, La. The 6ft 210lb linebacker has excellent awareness and quick feet to meet running backs in the hole. Lawson was one of the top tacklers for the Bears this past season, and helped them on their run to capturing another State Championship this year. Lawson is not only a student on the field, telling me he is always studying film of opponents. He is also very attentive in the classroom as well, with a 3.7 GPA and a 22 ACT score. Lawson tells me he has a three rep max on bench at 270lbs, 275lb clean and 415lb on squat.

Check out his film here

What age did you start playing football?

When I was four, I started playing in like the BREC league flag football. I was playing for the Gators. Then I slowly started to progress my way up.

What do you love about football?

I love the physicality, that’s the main thing that has to happen. Second, I just feel at peace with football, there’s no real thinking, I’m just there on the field. Everything that happened that day at school, or in life is just one stride away once I’m on the football field. It builds my confidence.

I tried multiple sports growing up, but I didn’t feel most of them really stuck with me. I played baseball for a year, I played basketball going into my freshman year. I started track, my sixth grade year and I’m still doing track at Catholic High. I started wrestling when I was 10, and I did that for about two years and stopped, then I started back again my ninth grade year, and I’m still on the wrestling team.

Wrestling definitely helps with tackling, and your film shows that you’re a sure tackler. What would you say type of play best describes you?

I’d like to say I’m more of a balanced linebacker. I can fit the gaps, I’m more of a run stopper. But if I need to go out and cover a pass I can. If I need to set up a rush, I can definitely rush the passer. I think I can definitely play all four downs. I don’t think I have to come out on third down, when there’s a pass or when we need a rusher. I think I can do it all.

I know that this season was a COVID year, but what were your goals this previous season?

This previous season we had a bunch of talent on our team. So my goal was to get on the field. I got on the field, and I just wanted to take the moment in. I really didn’t have a set number of tackles. I didn’t really have personal goals, they were team goals. I wanted to get District Champ, and State Champ, and First-Team District. I didn’t get First-Team, I got second. I think the District Champ was the main thing, and then State Champ. That was like a big goal. I want my team to be a three time state champ. We can definitely achieve that. We have a lot of talent, and I feel that we can achieve that. If I had to break down my personal goals though it would be to have over 40 tackles, at least have a pick, and not necessarily stats wise but be a leader and lead the team. I want to end the season with a championship every year, and end the regular season with a district champ.

What were you doing to achieve those goals?

I think the main thing was, I had to come in. I was the young guy, I didn’t know what the big stage felt like. I remember our first game was against U-High, that’s a big game around here. “The Battle of Baton Rouge.” Just focusing in on the moment and listening to the older guys. I think that was the best, just having that year with those older guys. They really took me in, under their wing. So listening to them was the main thing and soaking in that moment. Then the next game we played Edna Karr. It got even bigger. That was another moment, just had to soak it in. Every week that’s how we got better. Starting the season off with U-High, Edna Karr and STM, three big games. I think showing up to practice and listening to those older guys and embracing the moment. I think that was the best thing for my team. Knowing that it was my time, as a player, and that coach was confident in me. I knew that anyone on our team was going to make a big play and you just had to know when your time was to make that play. I think that’s all I could do.

Speaking of those older guys, who would you say are some of your biggest influences?

I think the linebacker that played next to me Mike Albarado. He was a guy that took me under his wing, when the guy in front of me went down. Mikey came to me that day and said, you’re now the one. You’re now going to be my younger brother. Then, Michael Cerniauskas, he was an amazing dude. He taught me a lot. Christian Mannino, another guy, he was just amazing. Even though he taught me how to make the plays on the inside, he was so big on the team. George Hart, I don’t know what to say about him. He was kind of like my father around this school. I feel like going against him every day in practice made me the man I am today. I was on scout team and not getting a lot of reps and he was trucking me the reps I did get. But I’d go back and still try to make a play. Looking past those guys, I’d say Lawrence Taylor, just because of his aggressiveness. Also, Devin White, just because of the linebacker that he is, you can’t take him off the field. I feel like that’s my biggest influence, and he’s from Louisiana.

Thinking of George and him trucking you in practice over and over again. You could have just given up and not tried to make a play on him, you think attitude has a factor in that, and in winning?

It’s a big factor, because if you don’t have leaders that are willing to test those young guys, and show them that attitude. I hear leaders say ‘body language is a big thing towards your attitude’ I never really paid attention to it before. But when I was playing this year, I really looked at Michael or Mikey and saw their body language. I saw how their attitudes were, like if they came in mad, that would change the whole practice. If they came in happy, that changed the whole practice. That “dog mentality” I don’t think it’s an attitude, I think it’s they came in hungry every day.

When everything is said and done, at the end of your senior year, what would you want all your coaches and teammates to say about you?

That I’m a hard worker, and that I lead the team in the way that I could. That I showed up to practice every day and worked hard, and no matter what he was the first here and lead everyone. 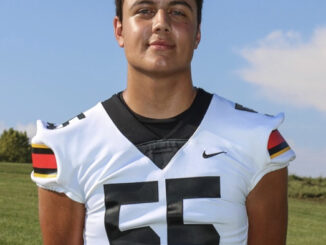 Diamond In The Rough: Colin Larson