BATON ROUGE – For the second time in three years, LSU running back Leonard Fournette has been tabbed the winner of the Corbett Award, which is presented annually to the most outstanding amateur male and female athletes in the state of Louisiana.

Fournette will be presented with the Corbett Award on Saturday, August 6 as part of the Greater New Orleans Sports Hall of Fame Banquet at the Mercedes-Benz Superdome. A total of 24 individuals, including this year’s Hall of Fame class, and two teams will be honored at this year’s banquet. All of the honorees are selected by the Greater New Orleans Sports Awards Committee, sponsored by the Allstate Sugar Bowl.

Fournette, a New Orleans native, claimed his first Corbett Award following his senior season at St. Augustine High School as he wrapped up one of the most decorated prep football careers in Louisiana history.

Now two years later, Fournette becomes the first two-time winner of the male Corbett Award since Shaquille O’Neal won in back-to-back years in 1991 and 1992. Fournette, O’Neal and Pete Maravich are the only two-time male winners in Corbett Award history.

“I’m extremely humbled and proud to be named the recipient of this award,” Fournette said. “There are so many great athletes in the state of Louisiana and to be named the Corbett Award winner this year is a tribute to the great teammates that I’m surrounded by and our outstanding coaching staff.”

Fournette earned first team All-America honors in 2015 after setting a LSU records for rushing yards (1,953), rushing touchdowns (22) and total touchdowns (23) in helping the Tigers to a 9-3 overall mark. Fournette capped his record-setting sophomore season by tying an NCAA bowl record with five touchdowns and 212 rushing yards in LSU’s 56-27 win over Texas Tech in the Texas Bowl.

Fournette became the first running back in SEC history to rush for 200 yards or more in three straight games. He also became the first SEC player to lead the nation in rushing yards per game since 1949 with a 162.8 average.

Despite his on-field success, Fournette has developed into an inspiring off-the-field talent as well, capturing the 2016 SEC Sportsmanship Award. Following disastrous flooding in South Carolina, Fournette auctioned his game-worn jersey from the Gamecock contest to raise money for flood victims – the final bid for the jersey was over $100,000.

The Corbett Award was created in 1967 and named in honor of the late James J. Corbett to commemorate his many contributions to intercollegiate athletics and specifically to the Sugar Bowl. At the time of his death, Mr. Corbett was the Athletic Director at Louisiana State University. These awards are presented annually to the most outstanding amateur male and female athletes in the State of Louisiana. The Corbett recipients are selected each year by members of the N.O. Sports Hall of Fame Committee, based on nominations submitted by the state’s sportswriters, sportscasters and sports information directors. 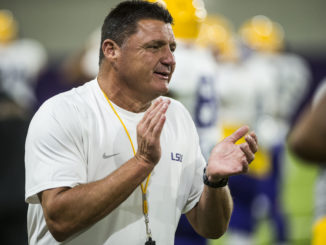