The battle cry for the Louisiana College football team for the past three weeks has been, “Go 1-0”. The Wildcats applied not only to the opening game of the season but to treating everyday with equal importance and being consistent in their practice and preparation. On Saturday night in front of a blue clad home crowd, the Wildcats fulfilled their first goal of the season and went 1-0, as they completed a 59-20 win over Wayland Baptist University. The 2017 Wildcats move to 1-0 on the season along with their new head coach Justin Charles, in his first game at the Wildcats helm. 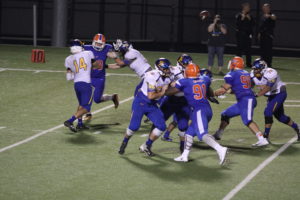 The Wildcats were able to get on the board early after a 3-and-out by the defense,that allowed D’Ondre Joseph, who got the start in the season opener and lead the offense for their first three possessions, move the ball into scoring position quickly thanks to a shot punt that set LC up at the Wayland 41 yard line. Curtis Sebren converted on a 32-yard field goal with 11:06 left in the first quarter. 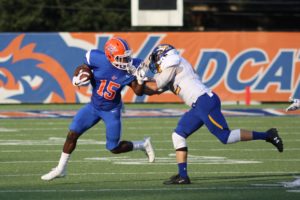 The defense forced another stop on the next drive and the Wildcats got the ball back in plus territory and moved in for their first touchdown of the season. Joseph found Drake Battaglia on a perfectly placed ball in the back corner of the endzone from 18-yards out to move the Wildcats ahead 10-0 with less than six minutes remaining in the first quarter. The LC defense stepped up once again on the next two WBU drives, forcing another 3-and-out and setting up LC’s second touchdown drive thanks to an interception by Doriel Yeager.

Freshman Wayne Griffin took the field for the first time after the interception with the ball inside the red zone and just four plays later found Lawrence Williams in the back of the endzone for his first career passing touchdown that put the Wildcats up 17-0 with under a minute left in the first quarter. Despite the three score lead, the Wildcats seemed to hit a wall in the second quarter as Wayland scored twice in less than five minutes to pull within a touchdown at 17-10. 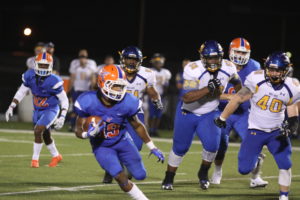 With 2:11 remaining in the half it was the freshman that took the field trying to get the Wildcats in the endzone before halftime, and do that he would. Two chunk yardage plays to Williams for 15 and Battaglia for 27 yards got LC into Wayland territory quickly. Another 12-yard catch by Leondre James got the Wildcats in the redzone and Griffin finished the 2-minute drill with a 3-yard touchdown pass to James with 30 seconds left on the clock to put LC back up by two scores 24-10.

It was more of the same in the second half as the Wildcats took the kickoff right down the field for a touchdown, this time Joseph finding James in the endzone, and before the fans had settled back into their seats from the halftime break, the Wildcats were ahead 31-10. The Wildcats and Pioneers traded scores late in the third after James caught his third touchdown of the night, and second from Griffin, with 5:07 to go in the quarter and Wayland scoring on a 13-play drive that ended in a 46-yard field goal. 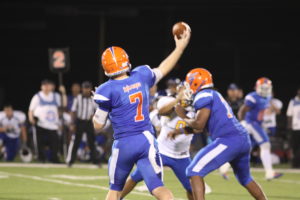 The final WBU score of the night came as a result of a bad snap on a punt that gave the Pioneers prime field position at the LC 14 yard line. The were able to punch in a touchdown five plays later to make the score 38-20 less than a minute into the final quarter. D’Ondre Joseph and the offense answered immediately with one of their best drives of the night, a 14-play, 75-yard touchdown drive that ended with a 6-yard pass to Lawrence Williams.

Already up big late in the fourth, it was, poetically enough, the Wildcat defense that cemented former defensive coordinator Justin Charles’ first win as head coach. A scoop-and-score by senior Ryan DeMattie and a fumble recovery in the endzone by Devyn Allen put the final 14 points on the board for the Wildcats in their convincing 59-20 season opening win.

Joseph and Griffin both completed 10 passes and threw three touchdowns for a combined 286 yards through the air. Joseph was also the Wildcats leading rusher turning in 94 yards on the ground, including a 39-yard gallop in the firs 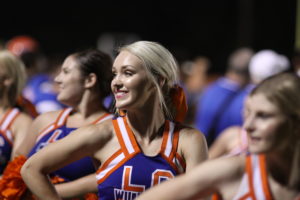 t quarter. Eight differnt receivers caught at least one pass in the game with D.J. Latino catching three ball for 81 yards and Leondre James pulling in four catches, three of them for touchdowns. Willie Smith led the defense with 10 total tackles, and Ryan DeMattie added six more including a 37-yard fumble recovery for a touchdown.

The Wildcats move into an early season bye week as they begin preparations for their American Southwest Conference opener on September 16 in Abilene against nationally ranked Hardin-Simmons University. Follow @LC_ftball or @LC_Wildcats on Twitter for the latest on Louisiana College football.