NEW ORLEANS – A trio of former Tulane football players is taking their talents to the next level as defensive endRoyce LaFrance, running back Rob Kelley and offensive lineman Arturo Uzdavinis each announced they will sign free agent contracts with NFL teams.

LaFrance will make the shortest trek of the group, landing with the hometown New Orleans Saints. Kelley is going to the Washington Redskins, where he will be reunited with former Tulane teammate Ryan Grant, who was a fifth-round selection (142 overall) in the 2014 NFL Draft, and Uzdavinis will be a Houston Texan.

A 6-3”, 259-pound defensive end from Harvey, La., LaFrance was a four-year letterman and three-year starter for the Green Wave from 2012-15. He posted 124 career tackles (81 solo), 37.0 tack¬les for loss, 20.0 sacks, nine pass break-ups, three forced fum¬bles and two fumble recoveries across 49 games with 36 starts. He completed his career ranked third in school history in sacks and fourth in tackles for loss.

LaFrance started all 12 games and tallied 43 tackles (31 solo, 12 assists) – including 13.5 tackles for loss and 6.5 sacks – to go along with one forced fumble, and four pass break-ups. He led the team in sacks while ranking second in tackles for loss.

“This is a great opportunity for me to play football in the city I was born and raised in and I would like to thank the New Orleans Saints organization,” LaFrance said.

“I want to thank the Washington Redskins organization for giving me this opportunity,” Kelley said. “It feels good to turn a dream into reality.”

A native of Thonotosassa, Fla., Uzdavinis is a 6’7”, 305-pound offensive tackle who was a four-year letterman and three-year starter for Tulane from 2012-15. He played in 48 games with 36 starts for his career.

“Proud and thankful to announce that I’m going to get the opportunity to be a Houston Texan,” Uzdavinis stated on his Facebook page. “Couldn’t be happier and more appreciative of everyone that made this possible.” 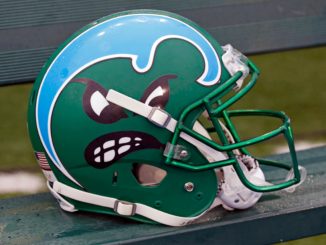 679 Comments on Tulane Football Trio Headed to the NFL