“ULL had made me a top priority in their recruitment. Looking at the culture all the times I had went down there really drew me in.”

It was also the persistence of two specific coaches that really helped to make a difference in his recruitment.

“I would like to highlight Coach Guilani and Coach Burris. They preached keeping the program traditional and family oriented and was on me hard from the very start.”

Coming from the great powerhouse football program like Neville High School in Monroe, Louisiana, Fobbs-White is used to playing under the bright lights and against some of the toughest competition not only on Friday nights, but in practice as well. Over the years, the Neville standout would go against current LSU offensive tackle Will Campbell and current teammate Lance Heard, who is one of the top offensive tackles in the country for the 2023 class. Going against SEC caliber players and holding his own against them has already made Fobbs-White ready for the Division I level.

“It has always over prepared me, not too many guys like me get that opportunity to go against complete studs on a day to day basis. So for me, it is a privilege.”

What is also a huge privilege for the Neville star is that he was picked by the team to wear the program’s prestigious jersey number, which is the number seven jersey.

“In Neville tradition, number 7 has always been a special contribution to the team, from Jaiden Cole all the way to Griffin Mcgee this past year, 7 has been an important piece. I want to continue that tradition.”

Not only will he continue the tradition of number seven, but he will also continue the tradition of great defensive linemen to come out of the program as greats like Justin Ellis, Courtney Wallace, Rashard Lawrence, Phidarian Mathis, and most recently, Enyce Sledge have all played at the Division I level and some have even played in the NFL. Fobbs-White wants to be the next great name to come out as he will do whatever it takes for him to be mentioned with the legends before him.

“It was very important. I wanted to eliminate that distraction early on to focus mainly on ball and not recruitment. I want to give all my focus and energy to my teammates and coaches.”

“Giving this school a state championship is my number one goal. They’ve waited long enough now it’s time to bring it home for Neville nation.”

Last season, the All-District selection was in the backfield quite often and is one of the best defensive ends playing the run as he had 37 tackles, 16 tackles for loss, 23 quarterback hurries, and four sacks. In order for him to be that disruptive defensively, he does have a lot of moves at his disposal.

“I’ve like to have an assortment of moves in my game so that I don’t become predictable. Other than that, I’ll say I make every move look the same so that when you try the guess what I’m going to do, I do the complete opposite. I admit I have been caught a couple times with the offensive linemen making a great guess and getting me.”

“I’ll say my conditioning. I want to be able to play a full high school game without being subbed out.”

Aside from being a talented football player, not a lot of people know that Fobbs-White’s most favorite hobby outside of football is reading books.

” I’m very interested in reading so any spots in Lafayette with good books should hit me up.”

Whether it is reading books or sacking the quarterback, Fobbs-White does everything with a positive attitude. In fact, both went hand in hand when he wrote a letter to head coach Jeff Tannehill about why he should wear the number seven jersey for the Tigers. Having a pure joy of doing both has helped this upcoming senior become the person and player that he is today along with the support from his family and coaches.

In this year’s class for the Ragin’ Cajuns, Fobbs-White is the fourth defensive lineman currently committed joining Dylan Carpenter from St. Amant High School, Lance Williams from Holy Cross High School, and Jarra Anderson from Paetow High School in Dallas, Texas. So far, Fobbs-White is just starting to get to know his fellow future teammates, but he has formed good relationships with some of the current Ragin’ Cajun players when taking his official visits.

“During my time down there, I met Andre Jones and Cameron Whitfield. They were cool people to be around, and I enjoyed my time there with them.”

Fobbs-White is looking forward to his time being down in Lafayette, and all he can promise the Ragin’ Cajun nation is that he is going to approach his time in college just like he approaches everything else, and that is with 100 percent effort.

“They’re getting someone who is going to give them his all no matter the circumstances.” 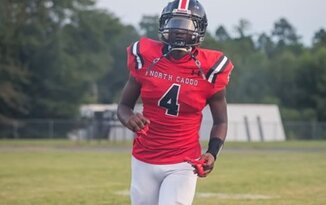 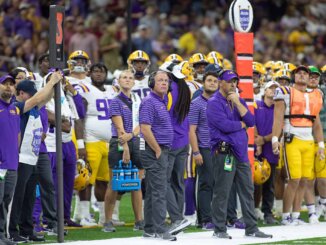 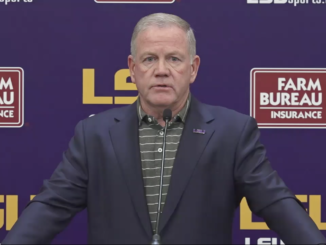