In this Quarter Finals matchup Liberty took on St. Thomas More in what proved to be a great matchup. The Cougars started with the ball on their own 23 and with only two plays they were able to get two first downs. Now with a fresh set of downs at midfield, the Cougar offense stalled due to the solid play of the Patriot defense in this set of downs. Looking at 3rd and 10 from Liberty’s 37 yard line, Walker Howard rolled out right to try and find space. As he was running, he saw Tanner Hornback beat his defender on a backside post and Howard perfectly hit him in stride for a 37 yard touchdown to get St. Thomas More on the board first. The score now 7-0 just over a minute into the game, Liberty knew that they needed to respond in order to keep up this offensive battle. The Cougars were implementing an aggressive game plan so they elected to try and catch Liberty off guard with an onside kick, however, Liberty recovered the kick to start their possession at midfield. After two first down runs courtesy of Kaleb Jackson and Sema’j Hatten, the Patriots were looking at 3rd and 4 from STM’s 19 yard line. Richard McKneely was called upon on an end around in which he was able to convert the first down and set up the Liberty offense with first and goal at the six yard line. Liberty was able to answer two plays later when Kaleb Jackson punched in a 3 yard touchdown evening up the score still early in the first. On the ensuing possession, St. Thomas More was able to get a great return from Jack Hines setting up the Cougar offense at midfield. Howard needed only four plays to get a touchdown after a beautiful backside fade set the Cougars up for a 3 yard touchdown run for Charlie Payton. The score now 14-7 with just over seven minutes remaining in the first quarter, STM was able to force a three and out after a third down sack from Austin Hollier. Liberty was backed up inside their own twenty so they elected to punt, giving the ball back to STM at Liberty’s 39 yard line. Going back to the same game plan of aggressive, quick play offense, the Cougar offense needed only 3 plays on the short field to get another 3 yard touchdown from Charlie Payton. On the ensuing Liberty possession, STM was able to force another three and out after Austin Hollier’s second third down sack of the contest. Forced to punt once again, St. Thomas More started with possession on Liberty’s 37 yard line and only using their rushing attack were able to score in 5 plays.

After the first quarter the score read 28-7, STM’s hot start is what proved to be the difference maker in this contest. In the second quarter, the Cougar offense chose to utilize their run game to kill some time off the clock. They started the second quarter with possession at midfield and needed only four plays to get another touchdown run for Charlie Payton. On the ensuing possession, the Patriot offense was driving down the field when a fumble gave STM possession back just outside of the Cougars own 20 yard line. The Cougar offense did not waste this opportunity, taking plenty of time off the clock with a long possession that was capped off by a 10 yard rushing touchdown from Charlie Payton to make the score 42-7 before the half.

Coming out of halftime, Liberty knew they needed a score. Starting with possession on their own 35, the Patriots were able to get a quick score. Kaleb Jackson caught a short pass on a wheel route but made some magic happen taking the pass 40 yards making 5 defenders miss in the process. On the ensuing possession, St. Thomas More was unable to get a first down in three plays so they unexpectedly decided to go for it on 4th and 1. Running on fourth, Jordan Okoye came up and made a big hit to kill the Cougar drive and give Liberty possession. On the first play of Liberty’s drive, they elected to go with a double pass from Richard McKneely to Brandon Davis for a touchdown. The score now 21-42 with 7:55 left in the third, Liberty could feel the momentum brewing. However, the St. Thomas More offense was able to put that momentum at bay, eating clock time with a long drive which resulted in a 3 yard touchdown for Hutch Swilley. Getting the ball back with 4 minutes left in the third, the Patriot offense was able to get another score for Kaleb Jackson on a toss play in which Jackson merely outran every defender in route to a touchdown.

The score 49-29 at the start of the fourth, this contest was essentially decided. In the fourth, STM was able to get two more touchdowns and Liberty was able to get a touchdown catch for Cody Rucker which made the final score 63-35. While Liberty did come up short to the former state champions, this Liberty team proved that they have a lot of fight in them. This Patriot team is only graduating 6 rotational players and the majority of their key contributors are Juniors. This is merely this program’s first year and this team went toe-to-toe with a high school juggernaut. It is safe to say that Liberty will be back in the playoffs for years to come. 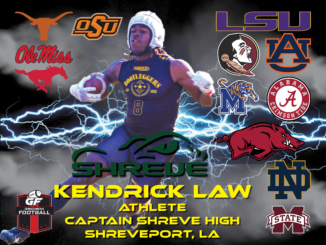 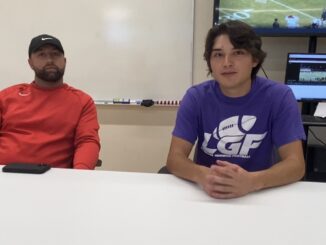