Kaleb James is a Class of 2023 Defensive End/Tackle for Mansfield High School in Mansfield, Texas. Kaleb has an NFL caliber build at 6’5” 235 lbs., and the crazy thing is he is only a Sophomore in high school. His build leaves offensive lines frustrated for the entire game; he proved this last season with 11 sacks. That number may be impressive, but you have to remember Kaleb is so good that he’s getting double teamed and sometimes even triple teamed the whole game. He is also versatile on the defensive line as he can line up anywhere and immediately have an impact. Kaleb may mainly be known for his success on the football field, but he also succeeds in the classroom with a 3.3 GPA. With numerous offers and endless potential, Kaleb James is definitely player to look out for in the future.

Why did you choose to play football and when did you start? I was playing baseball when I was little got tired of it started playing at 7, I chose to play it because my dad got me into it at a young age.

What life skills has football taught you over time? It has taught me how to be a leader, work in a team setting, and how to face adversity.

Would you consider yourself a speed rusher, power rusher, or a run stopper? I see myself primarily as a power rusher.

What’s your go to move to get past an offensive lineman? Probably a cross chop, because I’ve trained the most on that with Brandon Tucker at Trench Warfare.

What technique do you prefer to line up on the defensive line? Probably just a 6, I like to be on the edge.

What are some things you think about pre-snap? I look for what gap I am getting to, the offensive lineman’s stance, and if he is leaning forward.

Do you see yourself as more of a hard-hitting tackler, or a conservative one? I feel like I’m a little bit of both, it really comes down to the situation during the game.

Do you play any sports outside of football? If so, how has that helped you on the gridiron? I played Basketball two years ago, it helped me with conditioning, and my footwork.

Does your jersey number (99) hold any significance to you? I picked the number 99 because it’s JJ Watt’s number and both my parents had that number.

How do you think Covid-19 impacted your Sophomore season? Contrary to other people’s experience, I think it helped me, I was in the weight room every day and I got stronger and faster. It also taught me how to deal with adversity.

Going into your junior season, do you have any goals set? I want to get more sacks this year more specifically 20, and I want to get bigger, faster, and stronger.

At the end of the day, who is someone you look up to? My dad, no matter what he’s going to put someone before himself and he’s hard worker.

Describe a time where you were going through adversity, how did you get through it? Just being in tough games, down on yourself, got to pick yourself up and keep going.

Finally, what are colleges going to get out of you? They are going to get a player who’s ready to grind, hardworking, and going to have a smile through the bad times and the good ones, and just a really skilled defensive lineman. 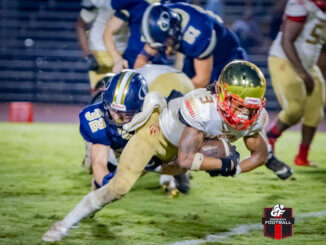 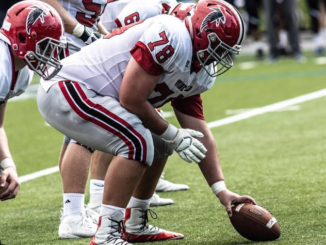 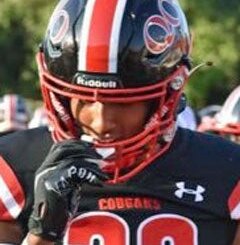 Diamond in the Rough: Kendall Johnson