Both the Acadiana Wreckin’ Rams and the New Iberia Yellow Jackets came off wins last week and wanted to build off the positive momentum at Acadiana’s Bill Dotson Stadium on Thursday night.

The Wreckin’ Rams came into the short week after bouncing from their week one loss to LCA with a dominating 49-0 week two win over Sulphur. Meanwhile, the Yellow Jackets also came into the game with a 1-1 record bouncing back from its week one shutout loss to Westgate with a commanding 35-14 win over Sam Houston. Something had to give as one team would lead the contest a game above .500 while the other team would leave a game below.

Acadiana’s vaunted veer option attack would set the scene for tonight’s game as the running offense drove 49 yards on eight plays to score the first points of the game with a ten yard touchdown run by junior running back Zeke Hypolite. Following the touchdown, the Wreckin’ Rams catch the Yellow Jackets off guard on the swinging gate and get two points when the holder threw it on the edge to junior Michael Willis. After the opening drive of the game for the Wreckin’ Rams, the home team led the Yellow Jackets by an 8-0 score.

After two touchdown drives, the Yellow Jackets certainly did not want to give Acadiana the football back, but unfortunately they did as Yellow Jackets sophomore running back Shanga Charles fumbled the football and the Ram’s star senior linebacker/safety Jaylen Lawrence would recover the loose football to give his offense excellent field position. From there, the veer offense would punch the ball into the end zone for the third straight drive with a third different running back in Cameron Monette, who scores from two yards out to widen the gap at 21-0.

It was a dominant first quarter for the Acadiana Wreckin’ Rams. In the second quarter, it looked more of the same as Keiland Williams burst through the line and outran everybody else for a 55 yard touchdown run to give his team a four touchdown advantage at 28-0. It was the second touchdown run of the night for the second generation running back.

However, the Yellow Jackets would show its sting when New Iberia would score its first touchdown of the football game with an 18 yard touchdown run from sophomore running back Shanga Charles, who emerges from the line of scrimmage and gets into the end zone with just over a minute and a half left to play until halftime. The Wreckin’ Rams would run out the remaining time and took a 28-7 lead to halftime.

After the Wreckin’ Rams would score again on a 74 yard touchdown run from Hypolite to make the score 41-7 with four minutes left to go until the end of the third quarter, it looked like the Wreckin’ Rams would finally run away with it, but once again, the Yellow Jackets showed some fight as it did not take more than two plays for their offense to respond as junior quarterback Allen Hamilton threw an 80 yard touchdown pass to his favorite target in senior wide receiver Christian Walker. Walker showed tremendous concentration as an Acadiana defensive back batted the football in the air and Walker caught the ball off the deflection and ran the rest of the way into the end zone. Just over a minute transpired in the third quarter as Acadiana still led 41-14.

In the end, Acadiana’s running game was too much with a fourth different running back scoring in the fourth quarter for the Rams as sophomore Jonah Gauthier showed his explosiveness late in the football game with a 75 yard touchdown run.

The running game that consisted of Keven Williams, Zeke Hypolite, Cameron Monette, and Jonah Gauthier accounted for all of the Wreckin’ Rams touchdowns plus 416 yards on the ground to help pull away from the Yellow Jackets with the final score being 48-14.

Acadiana head coach Matthew McCullough thought his team played really well in the win and that the Wreckin’ Rams have a lot to look forward moving ahead after improving their record to 2-1 on the young season.

“I thought we played pretty well. There are some things that we got to work on. I thought we blocked really well early. We were working on some stuff on offense. I thought we did some good blocking against the run.”

“Of course, Keven played extremely well. We also got some other running backs that played really well and we have a bunch of different guys that can help out in different times. We gave up some plays on defense, but overall, I thought we played okay.”

Check out the complete game highlights below and postgame interviews below! If you haven’t done so already, please subscribe to our channel and hit the bell to get notified on all of our latest videos!

Acadiana’s senior running back Keven Williams was exceptional last night with 193 yards rushing and three touchdowns on only ten carries. Once he broke the open field, nobody could catch him and he also set the tone early for this running game with the three touchdowns all coming in the first half.

One of the bright spots tonight was the play of New Iberia senior wide receiver Christian Walker, who had five catches for 142 yards including an 80 yard touchdown.

Next up, the 2-1 Acadiana Wreckin’ Rams will play the undefeated Lafayette Lions. Meanwhile, the 1-2 New Iberia Yellow Jackets will host the 2-1 Southside Sharks. 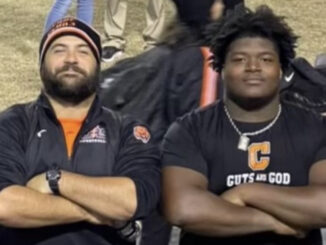 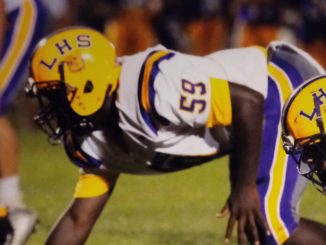 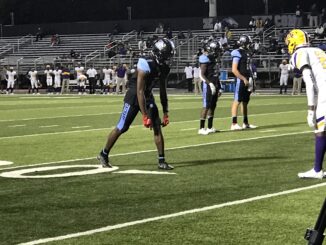