The Belaire Bengals’ senior night was last night, and the St. Michael High School Warriors came to Belaire for a division matchup, and to spoil the last home game of the season for Belaire.

This game started with a stalled out drive by St. Michael, and then Belaire threw an interception, which was fumbled and the Belaire offense recovered for a 25 yard gain. They punted, pinning the Warriors at the 6 yard line. St. Michael punted, and the first play back on offense, Denichlass Jeter took a QB designed run 30 yards to flip the field, but the teams traded punts to end the first quarter 0-0.

Belaire attempted to punt early in the second quarter, and it was blocked by St. Michael and returned for a touchdown, and then Belaire promptly threw an interception to give the ball to the Warriors on the 5 yard line, leading to another touchdown. A Belaire punt on the ensuing drive lead to a huge touchdown run by Damon Blocker, and it was 21-0 before you knew it. The teams traded punts, and headed into halftime with the same score.

Belaire received the ball to start the second half, and punted to St. Michael, returned for a touchdown. Makih Palmer responded with a 70 yard receiving touchdown, and the score moved to 28-6. A failed Belaire onside kick led to a St Michael punt, and Belaire ball on the 1 yard line. An 80 yard completion from Lecoreyan Compton to Cameron Johnson gave Belaire a 1st and goal, but St. Michael pulled down a goal line interception, and the game went into the 4th quarter 28-6.

The Warriors punted, and then Belaire threw another interception to give them the ball back. Blocker broke off another long touchdown run, 65 yards this time. Belaire began driving, and then St. Michael got their 5th Interception of the game. They ran the clock down, and  the game ended 35-6, St. Michael. 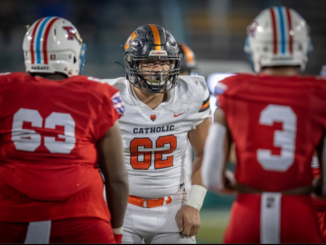