The LSU Tigers landed themselves a huge prospect at a position of need for the 2023 class and did so by grabbing one of Louisiana’s top prospects in Tyree Adams. From St. Augustine High School in New Orleans, Louisiana, the 6’6, 285 pound four star offensive tackle prospect was the 17th commit in this year’s recruiting class for the Tigers as well as the second player at his position in this class. Adams chose the Tigers over the likes of Georgia, Florida, and Ole Miss. For Adams, there were a couple of factors that helped him make his decision to commit this past Friday.

“It was the love that LSU showed me. I really felt at home whenever I was around there.”

That feeling started ever since the beginning of this process with the LSU coaching staff.

“LSU started reaching out to me at the start of the year. The constant communication was everything.”

There was indeed constant communication between Adams and the LSU coaching staff, but it was the relationship that he built with offensive line coach Brad Davis that really made the difference in his recruitment.

“The relationship is everything you can ask for with Coach Davis. How he trust and believes in his guys is everything.”

It is not only the coaches that Adams has built a great rapport with, but it is also the current and future players that he has also gotten to know over the last couple of months.

“The relationship is great with all of them from Will Campbell, Emery Jones, to Bo Bordelon is great. Those are great guys that love LSU just as I do! In 2023, I talked to Trey Holly and a couple of other guys. It’s a great relationship with my future teammates.”

Focusing on the future at LSU is great and all, but Adams is focusing on his senior season at St. Augustine High School.

“My goals are to win the state championship, win district, help my brothers sign to colleges, and to graduate with a 3.5 or above.”

On the field, this Purple Knight is continuing to improve on his run blocking as his pass game technique is among the best in the country at his position. Because of his incredible size, athleticism, and pass blocking ability at tackle, the LSU coaches have compared him to one of the best left tackles in the NFL.

“A lot see me as a Terron Armstead type player, but I see myself as being me and playing my game to the best of my abilities.”

Adams has goals of doing great things at LSU including earning a degree, winning a national championship, and becoming a first round draft pick. All that just means more coming from a Louisiana native and now becoming the fourth different player from Louisiana to commit in this year’s class for the Tigers, he hopes that other Louisiana natives can continue that trend.

“Let the home grown talent stay home and represent for his state. I feel I can do that well and be the next great LSU Tiger to come out of Louisiana.” 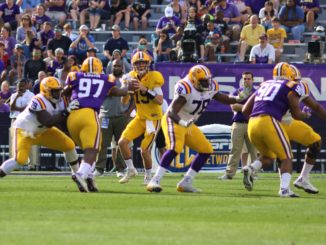 Journey to the Draft: Garrett Brumfield 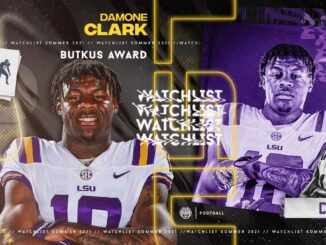 “Be Where Your Feet Are”