In this issue of School Spotlight, I interviewed head coach Eric Trudo of Van Meter High School in Van Meter, Iowa. Coach Trudo has been coaching at Van Meter for the past 25 years and head coach for the past 18. Before that, coach Rick Roberts, currently the schools Athletic Director and current Offensive Coordinator, started a winning tradition for the school. Before coach Roberts started in 1993/94, the school would squeak out three maybe four wins per season.

The Van Meter Bulldogs has developed into a power house program in Class 1A. They have not missed the playoffs since 2007. Since 2007, they have won two State Titles, been runner up three times, and two quarter finals appearances. Coach Trudo said, “It starts with the kids. Our kids are bought in to what we are doing here. We don’t have the biggest kids, the fastest kids, or the most talented kids. What we have here are hard working kids that want to succeed. Second, I have great coaches. Most of the coaches have been here the entire time I have been here, with a few minor changes. I cannot say enough about my coaches. They put in the work and develop our kids to be the best they can be. We do not have a lot of DI guys here, only three or so of my former players went off to play DI ball, while the rest go to either NAIA or DIII. Our kids here are multi-sport athletes, playing 3-5 sports. We know we do not have those three or four star players, so we focus on developing all 30 of our guys. We only have two or three guys that play both ways, so we are just gonna wear you out and beat you down both physically and mentally. Our kids both work hard and play hard.”

Coach Trudo also told me, “We have a great support staff. Our community really gets behind us and helps this program. I cannot say enough about this community. I was asked the other day “how hard is it to be a coach these days?” and to be honest, I feel very fortunate that I have the parents that I do. I very rarely have parent issues or things like that. They just do a tremendous job of supporting our kids and coming alongside them and giving them (the kids) what they need to be successful. So I really appreciate that.”

While talking to the ball coach, I realized that he is down to earth guy and very humble. Typically when I talk to coaches that have had the success or some of the success as coach Trudo, the coaches become very arrogant and start to believe their own hype. However not in this case; coach Trudo could not stop talking about how great his kids, fellow coaches, and his community is.

As a coach, I like to ask other coaches for advice. One thing he told me that really stuck out is that he is always learning. He said, “after 24 years coaching this game, I still ask questions and find ways to learn from other coaches.” I find that motivating because after 15 consecutive playoff appearances, coming off a state championship, and all the success his program has had, he still seeks advice and counsel from others. He also told me, “there is no silver bullet for success. You have to work hard. What I have found is that the football coaching fraternity is probably one of the best fraternities out there. So go talk to coaches that have had success in the past and find out what works. There is no secret to having a successful program. So work hard and put good coaches around you.”

As we were finishing up our conversation, I asked coach Trudo to name three or four of his guys that we should all watch for this season. He said Ben Gilliland, Carter Durflinger, Michael Steinfeldt, and Will Gordon were all returning starters and people should keep an eye out for them.

LB Ben Gilliland is a class of 2023 player. Ben is 6′ 180 LBS. Coach Trudo says, “Ben is a 3 year starter. He is a student of the game, he is always right (always in the right spot). He is a physical linebacker. Ben will also be competing for the starting quarterback spot as well this fall.” Ben was 1st Team All-State, and 1st Team All-District in 2021. I like Ben’s first step when he is diagnosing the play. He takes a shutter step vs a backstep. This way he is not taking himself out of the play. I like how versatile he is used in his defensive package. They can use him in the flats, back at safety, of in the box, and he will still make the play. He has decent size and speed. He will need to continue to bulk up before this season.

LB Carter Durflinger is a class of 2023 player. Carter is 6′ and weighs 175 LBS. Coach Trudo says, ” Carter is a 3 year starter at LB but projects more as a Strong Safety or Free Safety at the next level. Carter is athletic and he makes big plays and is a playmaker on defense. On offense, Carter is a very good receiver.” Carter was 3rd Team All-State and 1st Team All-District. I like Carters game speed. He is probably a 4.6/7 guy, but he is flying on gameday. I like his route running abilities as a receiver. He makes a clean stick move and gets open. On defense he is flying to the ball. He is a little small for linebacker, but he plays big. I like how he can flip his hips to cover or sink his hips to rush the QB. He is a very versatile player.

OL Michael Steinfeldt is a class of 2023 player. Michael is 6’3″ and weights 240 LBS. Coach Trudo says, ” Michael has bulked up to 240 lbs this offseason. He is a hard nose blocker and very aggressive. He plays very physically. Michael is also a 3 year starter.” Michael plays with good pad height and quick feet. I like his ability to pull and get to the next level. The one area that I would say he needs to concentrate on is bulking up. He has put on 20 lbs of muscle since the fall, but I feel that he has the frame to add a little more before the fall.

WR Will Gordon is a class of 2024 prospect. Will is 6’3″ and weights 185 LBS. Coach Trudo says, “Will has a great frame and plays both WR and FS for us. Last season he was our starting FS. Will also runs track. He rans a 11.45 100 meter dash this spring. Will is an extremally aggressive player. He will really come and get you. He is great in run support. Will has a huge impact with his size and speed.” Like coach said, Will is an aggressive player that will come up and lay a hit. He has good speed and excellent size. Will also makes great reads on the ball and can cover sideline to sideline. 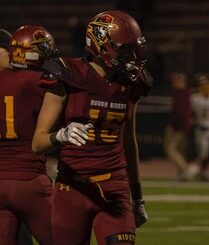 Diamond In the Rough: Cam Jones